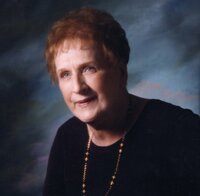 Carol M. Baldwin, 92, of Camillus, New York, passed away on Thursday, May 26th.  Born Carol Newcomb Martineau in Syracuse on December 15, 1929, she was the child of Roy and Marion Martineau and had one brother, and five sisters. She met her future husband Alexander R. Baldwin Jr. of Brooklyn, NY while attending Syracuse University. In 1954, Alec, (as he was also called), moved the family to Long Island where he taught at Massapequa High School until his death in 1983. Carol devoted herself to raising her children and when her last was a teenager, she went to work in marketing research for a firm called Quick Test.

In 1990, she was diagnosed with breast cancer. After battling and surviving, she joined with a number of Long Island-wide breast cancer organizations. With the support of the university’s then president, Shirley Strum- Kenny, The Carol M. Baldwin Breast Cancer Research Fund was opened on the campus of SUNY Stony Brook, as well as, The Carol M. Baldwin Breast Care Center. Some years later, Dr. Patricia Numann, in coordination with SUNY Upstate University, opened another chapter The Carol M. Baldwin Fund of CNY in Carol’s hometown of Syracuse, NY. The combined efforts have raised millions of dollars for the cause.  “She spent the last 32 years of her life as a fighter and a champion for the cause to which she devoted so much energy. We are all enormously proud of her accomplishments.”

The family will be hosting visitation on Friday, June 10 from 3PM to 6PM and 7PM to 9PM at Abundant Life Christian Center 7000 All Nations Blvd, East Syracuse, NY 13057.

To have a memorial tree planted in an area of need in honor of Carol, or to send flowers for services, please use the Send Flowers link to the left. Online condolences for Carol's family may be left under her tribute wall.

Ballweg and Lunsford Funeral Home LaFayette, has care of arrangements.